It is my distinct pleasure to welcome you to our Unify Sedona… a rainbow alliance website! We have formed a new non-profit to promote acceptance of diversity and to provide education for the greater community at large. Our board is comprised of people from all walks of life: gay, lesbian, straight and transgender.

Through education comes understanding that we are all much more alike than we are different. When we were approached by the Arizona Community Foundation to discuss building unity through diversity, we were energized. We wanted to come together to strengthen our community.

We are in a time of great change and want to promote positive momentum surrounding human rights. Following this premise, we have adopted the Four Pillars that the Arizona Community Foundation first shared with us when we were forming this alliance: 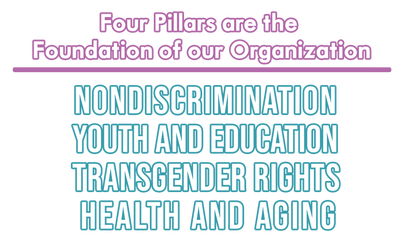 As you can see, we have some work to do. Please join us in our journey to make this world a better place under the Sun.
​

Jan has a long and successful history of educating children and teachers. Her varied roles as teacher, supervisor, counselor, principal and director in urban, suburban and rural settings have brought her broad experience and depth of understanding the crucial issues that face children in our society. She earned a BS in Ed., MEd in administration and psychology, and is a Professional Fellow in Community Management from Case Western Reserve University. Jan has lectured in the universities in China, Japan and the US to help professional learn how to address children’s unique and differentiated needs. In England, she presented a paper at Oxford University. Jan moved to Sedona in 2005 and is a founding board member of Northern Arizona Restorative Justice. She is also a founding member of Unify Sedona and serves as secretary as well as serving on the board of A Center for Creative Education. She is currently the President of Site Council at West Sedona School. Jan’s interests include child and animal welfare, lifelong learning and relaxing with family and friends.
Barry Maketansky (He/Him)
Vice President
​
Actively involved in the non-profit community across the Verde Valley, Barry is Vice President and a founding member of Unify Sedona’s Board of Directors. He is a board member and lead facilitator for Northern Arizona Restorative Justice and serves on the board of the Sedona International Film Festival. Raised in New Jersey, he did his undergraduate work at Michigan State university and has continued his graduate studies in the non-profit and philanthropic areas. Much of Barry’s work has included the defense of endangered species against extinction, special expedition cruises in the Amazon and varied ecological studies for national Geographic in Mexico and Central America. Barry’s interests include the environment, animal welfare, theater and social injustice.

Marie Helt (She/Her)
Treasurer
​
​Marie is a longtime educator with multiple degrees In languages and literature as well as a Ph.D in Applied Linguistics. She has trained teachers at the undergraduate and graduate levels in Germany, Egypt and the United States. In retirement now, she her focus is on women’s education and safety, LGBTQ advocacy and voter rights and education. Marie serves on the board of University Women of Sedona and the board of the League of Women Voters of the Greater Verde Valley. She volunteers at Twice Nice, which supports the Verde Valley Sanctuary. Marie is a founding member of Unify and has loved Jazz since 7th grade.
Tracey McConnell (She/Her)
​Secretary

Tracey comes to Unify Sedona as a founding member with 30 years' experience in community building and organizing. She's worked as a nonprofit consultant for statewide and Yavapai County nonprofits including the Verde Valley Sanctuary, Arizona Myeloma Network, Prescott Area Leadership, Arizona Business & Education Coalition, and First Things First. Tracey has also served as a philanthropic advisor for the Arizona Community Foundation; projects director and coordinator for Youth Count; project director for Arizona State University’s Center for Nonprofit Leadership and Management; and volunteer coordinator for the Society of St. Vincent de Paul. An Arizona native, she holds a bachelor’s degree in Intercultural Communication from ASU. Tracey grew up  in Phoenix and moved to this area more than 20 years ago. She raised her young adult son in Chino Valley, Prescott, and Cottonwood. Most recently she served as an advisor to the Unify Board of Directors. Tracey's interests are social justice, serving vulnerable populations, the LGBTQ+ community, facilitating positive collective change for tough social issues.
Rachael Ryan (She/Her)

Rachael joined the Unify Sedona board in October, 2021. ​She is a native of the Pacific Northwest and served in the United States Air Force. Her practice for 25 years as a dental hygienist included pediatric surgery and dentistry for countries in need and volunteerism for the SmileMobile, treating children with special needs. Once settled in Sedona, Rachael realized her passion for teaching in a Montessori classroom. An advocate for human and animal rights as well as protecting the environment, she is also an avid reader and loves to hike in this area or anywhere.
James Dunne (He/Him)

Jim is a founding member of Unify Sedona and has been an educator since 1960. Retired now, he continues his love of assisting students. Starting out in vocal music, he earned a Masters and Ph.d  and was a college professor for 30 years. Jim has served on the board of the International Nanny Association. Jim is a lover of the Arts: music, theater, dance and film. As a member and contributor, Jim has made an impressive addition to our board. His Unify goal is to represent the issues around health and aging that are faced by our elder population in this rural area.
Samyo Shannon (He/Him)

​Samyo Shannon is a long time resident of Sedona and has strong interests in international cultures. He has always been involved with the Fine Arts and Design. He has worked as an event planner and on décor for many local organizations, including the Sedona International Film Festival, Verde Valley Sanctuary and Verde Valley Caregivers. Samyo is a passionate supporter of human rights in all forms and has been involved with the formation of Unify Sedona since its beginning. He feels the importance of promoting and educating our greater community about LGBTQ rights.
​
Lou Helt (He/Him)

Lou joined the board in May, 2021. Lou is an Arizona native, having grown up in Flagstaff and graduated from Northern Arizona University with a major in German and a minor in Women and Gender Studies. Although he currently resides in Portland, Oregon, his passion for LGBTQ+ advocacy in AZ is lifelong, and he is thrilled to be able to contribute to Unify Sedona as a remote board member. Lou is the former vice-president (and interim president) of Northern Arizona Pride Association, former president of PRISM, NAU's LGBTQ student organization, and currently runs a Transgender Employee Resource Group (ERG) and operates as a Diversity and Inclusion Ambassador in the tech sector in Portland. In his spare time, you can find Lou exploring the beautiful Pacific Northwest or hiking around Northern Arizona.
​
Carolyn Martin (She/Her)

Carolyn’s journey began with a childhood immersed in the arts. Singing, dancing, acting, and playing the trumpet consumed her middle and high school years. Starting college at the University of Missouri as an aspiring music teacher, she realized that she wanted to broaden her horizons. She was guided to become an optometrist. This path led her to The University of Alabama at Birmingham for a phenomenal education in optometry and culture. Ever wanting to know more, she continued her training with a residency at the VA Hospital in Albuquerque. This too provided more lessons in the social sciences. The next 20 years were spent in various modes of practicing eye care, gleaning the virtues and shortcomings of each. Those two decades culminated in the opening of Eye Boutique of Sedona, a mindful eye clinic in service to humanity. Joining Rotary International in 2016, Carolyn found an avenue to help promote peace among people. It is a privilege to join UnifySedona’s Board as it embodies what Carolyn has come to know over her life’s journey: we are all ONE.
Tony Peña (He/Him)

Tony Peña joined the Unify Sedna Board of Directors in 2022. He is native to Arizona and attended NAU, where he was president of PRISM and was elected the first male collegiate Homecoming Queen in 2013! He has been a restaurant manager and a technical customer support agent for the past five years and is the founding chair for the LGBTQIA Employee Resource Group (ERG) and a pioneer advocate for employees in the Diversity and Inclusion Department. After college, Tony relocated to Portland, Tony is eager to assist us at Unify in expanding our reach toward a larger BIPOC (black, indigenous and people of color) population and to help us be an example for Unity in local, regional and state arenas. In his free time, he enjoys volunteering, exploring new food spots, listening to true crime podcasts and reading.

Advisors to the Board

​Suzie came to Sedona from New York City, where she enjoyed a long career as a performer, singer and songwriter. She started the non-profit Sedona Performing Arts Alliance to support the performing arts here. Suzie was instrumental in the opening of the Studio Live venue and loves watching how live performance can connect communities and lift the young while energizing the adult community. She believes in adhering to a strong belief that the performing arts are crucial to the fabric of every community and continues to advocate to that end. Suzie is a founding member of Unify Sedona and sees the value in the inclusion of all LGBTQ and Allies to effect positive change in our community.

Elodie Arbogast joined the Unify Board of Directors in February 2020 and got right to work, promoting our mission in the Sedona community. A Sedona native, she graduated from Pitzer College in Claremont, California, where she double majored in history and studio art. She enjoys a special interest in LGBT+ history in the United States. Her hope is to expand Unify Sedona's reach in Sedona and the Verde Valley and to help new audiences educate themselves and find community. She is a freelancer and sequential artist. In her leisure time, she enjoys cooking, crafting and working out. She even tries to fit in video games.

We welcome Mar Chang to the Unify Sedona board as our first Student Advisory member. She attends Verde Valley School in Sedona and is on track for an International Baccalaureate Diploma. A former dancer, she finds her passion in equestrianism and community service. Mar is a founding member and president of Rotary International’s Interact Club at her school. When not at school, she enjoys a good book, skiing, hiking, and cooking. Mar is honored to bring a youth perspective to the Unify Board.